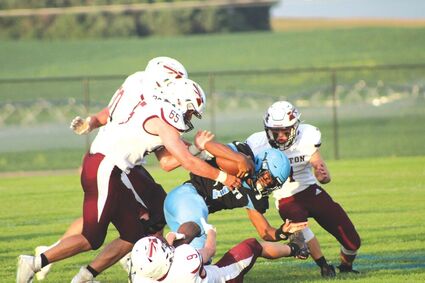 Tough defense • A group of Warrior defenders key in on Summerland's Jaykwon Petite, Friday. The teams met on the new Bobcat football field. Although the game was tied at the midway mark, Crofton took control of the game in the second half, securing a 42-20 win.

Summerland Coach Tom Thramer said Crofton would be "a different animal coming down from the 11-man ranks."

Crofton proved him right, taking advantage of the second half to claim a 42-20 win.

At times, Thramer said, his band of Bobcats "did a good job against them."

"We have to find more consistency on offense and defense to come out on top in games like that. I thought are kids played tough, but Crofton did a good job of wearing on them with their style of play," he said.

While the Bobcats held a 14-12 advantage at the end of the first quarter, Crofton settled in, knotting the score at 20 a...