Bobcats fall short in opening game, fall by one to Riverside 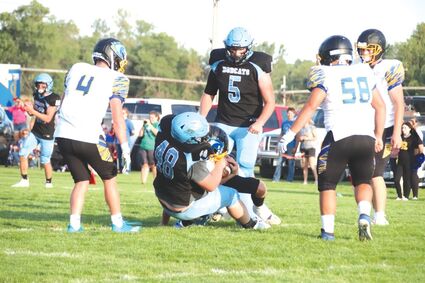 Tumbling down • Defensive lineman Joe Ahlers wrangles a Riverside player to the turf during first-quarter action, Friday, in Spalding. Despite two scoreless quarters, both offenses exploded in the second quarter. Ultimately, the Chargers surpassed the Bobcats in the final minutes of the game to claim a 27-26 win. The Bobcats open home play, Aug. 26, against Crofton. Kickoff is scheduled for 7 p.m., in what will be the first-ever game played at the school.

An season-opening battle against Riverside found the Bobcats coming up shy, as the Chargers charged downfield in the final minutes to earn a 27-26 win.

It was a battle of defenses, at least for two and a half quarters.

Summerland and Riverside traded possessions in the first period, which ended in a goose egg.

And then, Trevor Thomson scampered 48 yards to give the Bobcats a 6-0 edge.

The Chargers tied the game after a nine-yard run by Andrew Krick, with 11:02 left in the second quarter.

It took the Bobcats just over three minutes to set up a 45-yard run by Thomson for a quick six.