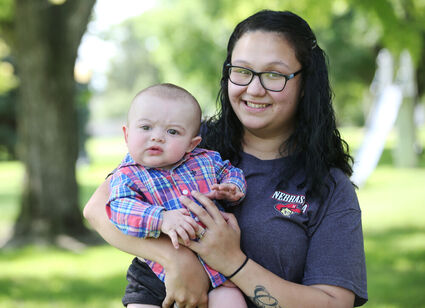 Quick delivery • Jasmine Gutschow gave birth to her son Raiden, Nov. 15, 2021, in an ambulance speeding toward Kearney. The two are pictured in their town of Franklin on Tuesday, Aug. 2.

Jasmine Gutschow felt nauseous when she woke up a few days before Thanksgiving last year. She brushed it off as typical pregnancy symptoms. She told her fiance he should head into work – the baby, not due for six more weeks, wouldn't be coming anytime soon.

Gutschow sat curled in the passenger seat on the...