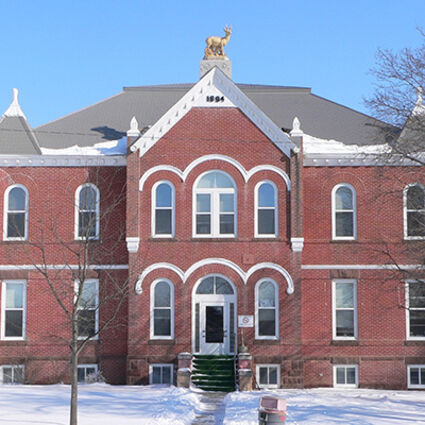 The Honorable Mark Johnson presided over the Antelope County district court through videoconference last Wednesday, July 27, sentencing two defendants and ordering a warrant be issued for a third who did not appear for sentencing as ordered.

William L. Knievel appeared in the Neligh courtroom to be sentenced on four counts committed March 29 near the Antelope County Law Enforcement Center in Neligh. Johnson rejected both a recommendation included in a presentence report prepared by the Nebraska Probation Office and a defense request for a probation sentence. Instead, he sent the 70-year-old Neligh man to the Antelope County Jail.

Antelope County Attorney Joe Abler told Johnson, "This was a peculiar case." He cited a probable-cause affidavit filed by Antelope County sheriff Robert Moore at the time of Knievel's arrest. According to the affidavit a Nebraska State Patrol officer, a county deputy and a Neligh city police officer had responded to a call from a female at Knievel's residence. Knievel had attempted to prevent officers from leaving his property with the female, then followed them to the LEC on foot. The sheriff indicated a Neligh police officer sustained a minor injury.

"He chest bumped the sheriff, challenging the sheriff to fight," Abler said, and was belligerent with officers inside the jail. Abler said Count I was reduced in a plea agreement, at the request of law enforcement, who did not want the Neligh man to have his first felony conviction at 70 years of age.

Knievel's attorney, Antelope County public defender Pat Carney, asked for probation, saying the PSI recommended it and telling the judge his client was "very concerned about going to jail. He did five days (when arrested) and it was an eye-opener for him."

When asked if he wanted to say anything prior to sentencing, Knievel said, "I want to apologize to sheriff Bob Moore and the officers for my conduct. I won't let it happen again. I don't drink anymore."

"You are not a bad man," the judge told Knievel before passing sentence. "But you did some bad things. Officers were confronted, pushed, shoved and hit by you. Officers (do) their job to protect the community, then someone like you comes up and thinks they know better."

He then sentenced Knievel to 30 days in jail each on Count I, third-degree assault, and Count II, obstructing a peace officer, both Class 1 misdemeanors, and seven days each for Count III, obstructing government operations, also a Class 1 misdemeanor, and Count IV, disturbing the peace, a Class 3 misdemeanor. The sentences were ordered to be served concurrently, or at the same time, and he was taxed $148 costs. Knievel was given credit for five days previously served.

Knievel was remanded to Moore's custody to begin serving the sentence.

Andrew F. Sternberg, 32, of Bloomfield will also see some jail time, in addition to five years of probation. He appeared alongside Carney for sentencing on a Class 2A felony, unauthorized use of a financial transaction device, more than $5,000.

Carney asked Johnson to consider going along with a PSI recommendation for probation, saying Sternberg's young son had recently been released from the hospital with "pretty serious medical issues." He said his client had an "inappropriate response to financial stresses," had always been gainfully employed and had "generally contributed to society." He said Sternberg had agreed to pay restitution as part of a plea agreement.

Abler told the judge, "An older gentleman was taken advantage of." He said the man had left a blank check to pay for feed delivered by the defendant, an employee of the feed company, who then took information from the check to make pickup payments. However, Abler advised the judge that Sternberg had been "open and honest" with law enforcement, before he recommended probation.

"You have a relatively minor criminal history which operates in your favor," the judge told Sternberg. "The court will take into account that you were cooperative with law enforcement." He noted the crime was committed prior to the birth of the defendant's son.

Johnson sentenced Sternberg to a 60-month term of probation for the crime committed between Feb. 23 and June 29, 2021, including fees totaling $870; restitution in the amount of $11,132.56, in 60 monthly payments of a minimum $186; and 90 days in the county jail with credit for five days previously served. The 85 days are to be served in two-day stents each weekend for 20 weeks, beginning Aug. 5, with the remaining time to be served before the end of probation if not waived. Sternberg was also ordered to write an apology letter to the victim within 30 days. He was taxed $147 costs.

Carney asked for clarification on the beginning weekend in jail and asked if it was waiverable.

"All are waiverable," Johnson said.

Tori A. Wooters, 26, of Neligh, who has a history of not showing up for court, failed to appear for sentencing on counts of possession of a controlled substance, a Class 4 felony, and criminal attempt of tampering with physical evidence, a Class 1 misdemeanor, committed Jan. 19.

"To tell the truth," Abler said. "I anticipated her not showing up because she failed to appear in county court a couple of weeks ago."

Johnson revoked Wooter's personal recognizance bond and ordered a bench warrant be issued for her arrest, setting a new bond of $100,000, 10% cash.

Wooters is represented by Carney.

Andrew J. Stephenson, 20, of Richland, Washington, appeared alongside his attorney, Frankie Hass of Omaha, for pretrial hearing on a Class 4 felony, possession of a controlled substance (methamphetamine), and two infractions, possession of marijuana and possession of drug paraphernalia. A plea bargain was announced. Abler filed an amended complaint, reducing Count I to criminal attempt possession of meth, a Class 1 misdemeanor. Stephenson pleaded guilty to the three counts committed Dec. 23, 2021, following an accident east of Oakdale on Highway 275. According to Abler, Stephenson was a passenger in a car involved in the accident and witnesses reported seeing him place items believed to be drugs into a backpack as he left the scene. One item later field-tested positive for meth. The prosecutor asked the judge to order a PSI report. Johnson ordered the PSI and set sentencing for Sept. 14.