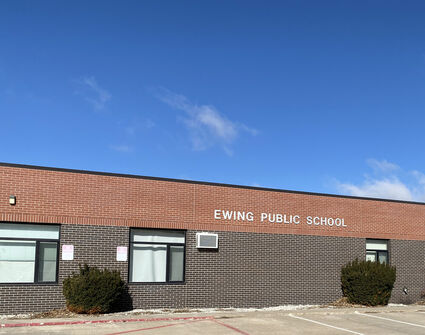 The Village of Ewing will not be the new owners of the former Ewing School site.

One item - discussion of Ewing school property - appeared on the agenda for a special meeting, held Friday, July 22, at 8 a.m., at the Ewing city hall.

"They rejected all the offers at their (school board) last meeting. It sounds like the school board wants to remove the contingency from our offer. We would have to bid higher than what we bid."

According to Ramold, school officials did not want to wait until the November General Election to see if Ewing residents would pass a 1% sales tax increase, which was included in the village's original offer, made June 10.

The sales tax bump was discussed as an option with Ewing residents, June 9, during a community meeting in the Ewing School gym.

Ramold told trustees he was not sure how to proceed with the project.

"If we take the chance of doing something and the tax doesn't pass, we're on the hook for that money. I think it was going to be awful hard to do it with the tax passing and, if it doesn't pass, we're $30,000 to $40,000 a year into that thing with no guarantee on return," he told fellow trustees.

The chairman said he consulted with former Clearwater Public School Principal, Mike Sanne, about a potential auction of contents and what to expect, based on the Clearwater site auction held in June 2021.

"There'd be some we could sell," Ramold said. "Clearwater received around $50,000 (from the auction) and I know we have less stuff to sell."

At that point, trustee Dustin Wright made a motion to enter executive session, which lasted approximately 20 minutes.

After exiting the session, Wright made a motion to purchase the school building for an undisclosed amount.

"We're keeping the dollar amount private, obviously, because anybody could come after this meeting and make a better offer than us," Wright said, prior to the vote.

His motion included all Ewing School property and contents. It would not be contingent upon the passing of a 1% sales tax increase. Fry seconded the motion.

Trustees Bill Graber, Dustin Jorgensen and Ramold voted against the motion, with Fry and Wright in favor.

"There you have it, looks like it's going to public auction," Wright said, as the meeting was adjourned.