Night at the Museum celebrates Orchard 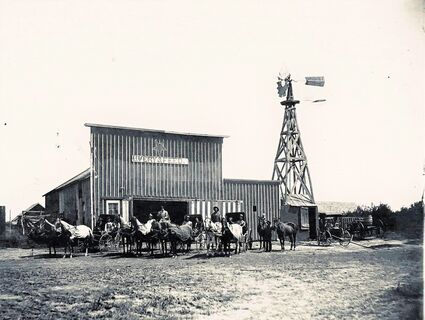 From past to present • Orchard will be featured at the Antelope County Museum's Night at Museum, July 3. Orchard Historical Society members will be be available to share knowlege about the community.

Orchard and its history will be featured at the Antelope County Museum on Sunday July 3, from 5 to 8 p.m., 410 L Street, as the Orchard Historical Society shares some of the community's historic photos and artifacts. Admission to this event is free.

"We are excited to be featuring Orchard (pop. 379), the county's second largest of its five villages," said the museum's executive director, Ron Westlake. "We take great pride in being a museum for all of Antelope County."

"Each of the communities in Antelope County has its own personality and background. Because each is different, each Night at the Museum is different. That's because we encourage local historians to present their history in their own way," he added.

A special treat at the event this year will be samples of Orchard's Corner Hardware Store handmade famous fudge.

Bev Krutz, member of the Orchard Historical Society board, said she and others from the society are looking forward to sharing some of Orchard's unique history with the public. Of special note will be enlarged and framed historical photos.

The society maintains a one-room schoolhouse in Orchard, with free admission and tours by appointment, and a former movie theater. In addition, the society regularly serves dinners and suppers, usually monthly. The charge for the meal is kept low because the society recognizes the meals and the socializing in Orchard's historic Rex Theater are a means of bringing cohesiveness to residents of Orchard and the surrounding area.

Orchard is in northwestern Antelope County on Highway 20. Its history is tied to what was then the Chicago, Burlington & Quincy Railroad, which today is the BNSF Railroad. The railroad, in 1888, ran through Brunswick, Savage (later named Royal), and Orchard. The first train came into Orchard on June 20, 1890, the same year the village was officially organized.

The Evening at the Museum also features self-guided tours of the entire museum complex, including the museum and its priceless artifacts, the one-room schoolhouse, the log cabin and St. Peter's Episcopal Church.

Over the last several years, two of the county's three cities, Neligh (pop. 1,599) and Elgin (pop. 661) have been spotlighted. (Tilden, which has a population of 953 is only partially in the county.) Also featured previously have been two of the county's five villages, Clearwater (pop. 419) and Oakdale (pop. 322). Not yet featured are the villages Brunswick (pop.138) and Royal (pop. 63).

For more information about the museum, visit http://www.antelopecountymuseum.