A Flurry of Fraud 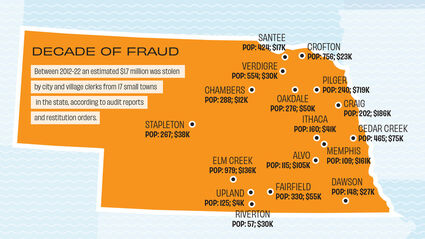 Mary Terry, the longtime village clerk in Cedar Creek, shook her head no whenever Steve Sharp told her she deserved a raise.

"Her answer was always the same. It was always, 'You can't afford to give me a raise,'" said Sharp, elected chairperson of the village board in 2010.

What Sharp didn't know: Terry, the clerk and treasurer, was giving herself unauthorized raises. She padded her paycheck with more than $75,000 in stolen village funds over six years while overseeing the tiny eastern Nebraska town's finances, records and utilities.