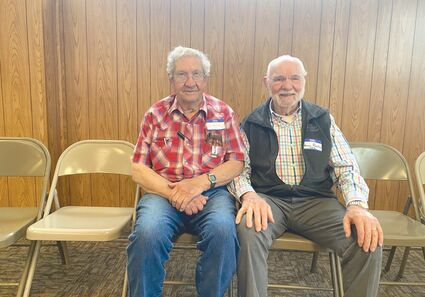 Class of '52 • (l-r): The oldest graduates attending the Ewing alumni banquet, Don Ruroede and Vernon Rockey, graduated together in 1952.

Ewing alumni gathered to reminisce and share memories, Sunday, May 29, at the St. Dominic's Hall.

Members of the Class of 2012 hosted the event, which drew a large crowd.

Two members of the class of 1952 were honored. Don Ruroede and Vernon Rockey were present.

The class of 1997 was represented by Tracy Larson Mathis, Makala Ruroede Peed, Tricia Kaczor Benda and...