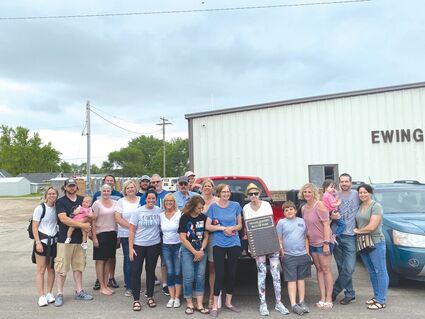 Three generations of the Thramer family accept the Ewing Hall of Fame award, in honor of Alex and Joyce Thramer, during the 2022 Ewing Summer FunFest parade.

For years, Alex and Joyce Thramer were well-known throughout the area for the Two Rivers Steakhouse, Thramer Irrigation, Summerland Golf Course and their participation in the community.

The couple was inducted into the Ewing Hall of Fame during FunFest, Sunday, May 29. The couple's children, grandchildren and great-grandchildren accepted the award.

In 1959, the couple moved to Ewing, where they purchased the Gamble Store, which was known as the hardware store in town, according to their daughter Linda Wingett. They ran that for quite a while until Alex went to work for Zimmatic Irrigation.

In the mid-60s, Alex and his brothers built Two Rivers Steakhouse, located east of town right beside the Two Rivers Motel.

"I'm not sure how they got the idea to start the steakhouse. All I know was here I am a little kid listening to them talk, and I'm thinking they're putting in an airport," chuckled Wingett, oldest child of the family.

"Mom didn't do the cooking, but she was a worker. They both worked morning, noon and night. Mom would clean the steakhouse then she would go to work all night." Wingett said.

Two Rivers Steakhouse was known for having top-notch bands play. Alex loved his country western music. Wingett recalled a time there were people parked on both sides of the highways because people couldn't get into the parking lot.

"I remember the Taylor Sisters coming from Lincoln and we had people from Sioux City, Yankton and everywhere. There are good memories out there ... good memories," Wingett said.

Eventually, Alex and the Thramer's son, Chuck, started their own business, Thramer Irrigation. Alex remained busy with this business until his retirement in 2008.

Alex was known as an overall involved man. He helped establish the Summerland Golf Course, where he served on the board of directors. In fact, the course still holds the Hardly Dark golf tournament in his honor.

"Dad always said it was hardly dark. If he was out having fun or something and someone would say they wanted to go home, he would say 'It's hardly dark!'" Wingett recalled.

The public tournament is normally held during the last weekend in July and has remained successful over the years. Usually, between 30 to 40 teams are involved.

The Thramer family continues to support the golf course. Over the years, they have donated several items, including the fountain and a TV.

Alex was also involved with the Ewing Chamber of Commerce, served for the C.O.R.E. development team and worked with ethanol plants, helping establish Husker Ag in Plainview.

"He was just involved ... involved with a lot of stuff. He was a good promoter. He enjoyed people," Wingett said.

Joyce was involved with the community as well. She helped with the maintenance of Memorial Park and enjoyed being in charge of the parades and making floats, according to her daughter.

"Mom was a good softball player. She loved her softball. She could throw a pitch that would knock your socks off. She would take her arm, and I swear she would swing it around 18 times before she'd throw it," Wingett said, smiling. 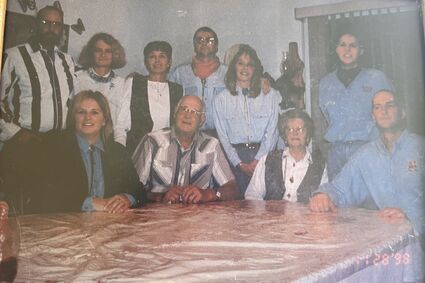 Surprise • Years ago, the Thramer family held a surprise birthday party for Alex Thramer's 70th birthday. The event was held in part of the family's irrigation business that was made to look like the old Two Rivers Steakhouse days. Everyone in attendance dressed in cowboy attire.

During retirement, the couple traveled, taking trips to Arizona, Hawaii and numerous states. They were active spending time with their kids, grandchildren and great-grandchildren.

"We got many, many good memories, so that is what counts," stated Wingett.

"It made me feel very proud and very blessed that I got to call them my parents. They were one of a kind. I got a soft spot for them in my heart," Wingett said.