Six advance to general election in school board race 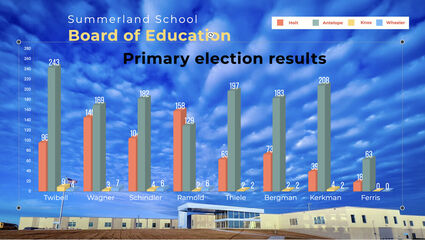 Moving on • Austin Twibell, Jeremy Wagner, LuAnn Schindler, Mark Ramold, Scott Thiele and Mia Bergman will advance to November's general election for seats on the Summerland Board of Education. They were the top six voter-getters in the May 10 primary.

Voter turnout in the May 10 primary election was more than 40% in Holt and Antelope counties.

Summerland Board of Education

A summary report from Antelope County Clerk Lisa Payne shows 49.68% of voters cast ballots in Royal; 46.63% voted in Clearwater and 46.39% made their way to the polls in Orchard.

Summerland Board of Education