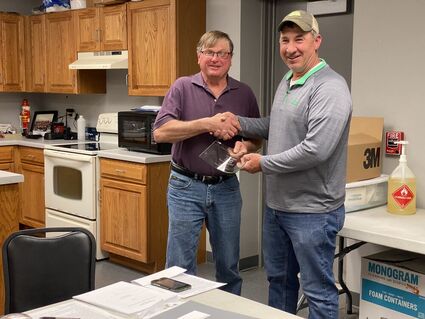 Serving others • The Village of Clearwater recognized a business, organization and volunteer, Monday, during the board of trustees' meeting. Steve Hankla accepts the Business of the Year award from trustee Steve Stearns.

The first annual Clearwater Community Awards were presented during the April 11 village board of trustees meeting. When people talk about Clearwater, they often mention the great people that add to the community and the abundant quality of life in Clearwater. Many incredible people, businesses and organizations were nominated, but unfortunately, there could only be three winners, according to economic develoment director Lauren Sheridan-Simonsen.

The Business of the Year was awarded to Orval's Auto Service, Inc. The car care business was established in 1963, by Orval Hankla. In 1973, Orval's son, Steve Hankla, took over the business. For more than 48 years, the younger Hankla faithfully ran the shop. Earlier this year, Rod Schlect purchased the business.

In a nomination letter, a community member stated, "Orval's Auto has been a great business for Clearwater. Always cheerful and eager to keep your car running!"

Another nomination stated, "The group sponsors wing night, which draws people from a wide radius to town. They assist with the rodeo and host a fish fry and veterans' dinner, plus they give back to the community."

The Volunteer of the Year was presented to LuAnn Schindler. She is active in the Clearwater Chamber of Commerce, Clearwater Historic Society, Clearwater Economic Development Board and other community organizations throughout town.

Schindler is co-owner and publisher of the Summerland Advocate Messenger, as well as the editor in chief.

She also is the proprietor of the sidebar, a consignment shop featuring uniquely, handmade Nebraska items. 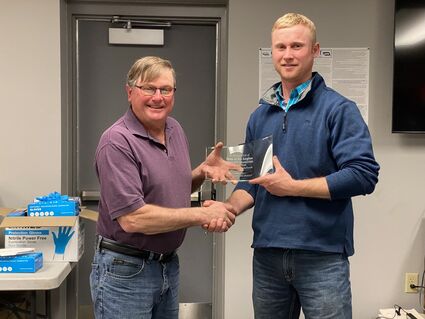 Serving others • The Village of Clearwater recognized a business, organization and volunteer, Monday, during the board of trustees' meeting. Steve Hankla accepts the Business of the Year award from trustee Steve Stearns.

Community members stated, "LuAnn is always someone who goes above and beyond for the Clearwater community. During the early summer morning hours, LuAnn donated her time watering and tending to the Main Street flowers. She spends time assisting the historical society and the chamber."

Another indicated, "Not only does she run an amazing paper that promotes our school, she's helping build a building that will celebrate the town's history."

In addition to the other nominations, another citizen stated, "LuAnn's journalistic integrity has earned her readers' trust. Our community works better together because of LuAnn."

The Village of Clearwater is honored to recognize the outstanding businesses, community organizations and community members who contribute the amazing quality of life in Clearwater. "Clearwater's Calling You Home," Sheridan-Simonsen said.