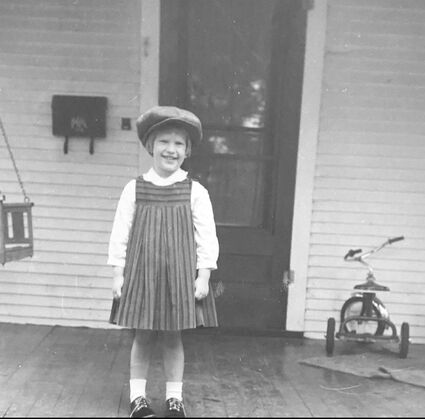 Grandpa Larson has been on my mind lately.

I'm not sure if it's due to binge watching "Peaky Blinders," set in Birmingham, England, in 1919, and the show's references to World War I and newsboy caps. Or, maybe I'm simply waxing nostalgic lately.

Grandpa served in World War I. I still possess a felt banner, complete with embroidered Army insignia and the words "Somewhere in France," that hung in the window of his family home while he served this country. He never talked about his time overseas. Never mentioned the atrocities I am certain he witnessed. He was a strong, yet unassuming man, tall and lanky, with undying devotion for his family.

Years after he died, Grandma would talk about him in the trenches, rats running over bodies of dead soldiers, disease rampant.

"How could he know then that his service provided a pension for me to live on," she would ask.

Honestly, I think the flood of memories were triggered by the baker boy - or newsboy hats - worn by Shelby family members in "Peaky Blinders." A baker boy hat features eight panels, tufted in the middle with a button. Most caps were constructed of tweed, either black, gray or brown, featured a stiff visor and, typically, a snap connected the front of the cap to the visor.

Caps of this type originated in the 14th century. In 1571, Queen Elizabeth I passed a law, boosting wool trade, requiring males six years of age and older, to wear a wool cap or face a daily fine. By the 1800s, newsies, hawking the daily print edition, donned this style of cap.

Grandpa owned such a hat. I'm not sure if he brought it home from France or England, or if he purchased it at some local store in northeast Nebraska. His was a wool cap, brown tweed. Each morning, before walking the two and one-half blocks to work at the Ford garage, he donned the cap. It became part of Grandpa's persona. Didn't matter what time of year, Grandpa wore the hat.

One of my favorite photos shows me wearing the cap, while standing on the front porch of our home in Clay Center. I'm guessing I'm around four, maybe five. Grandpa and Grandma were visiting for the weekend, more than likely, while the 'rents were in Lincoln for a Husker football game.

The cap survives today. It's packed away in the attic at my sister's house, a family heirloom worth more than its weight in gold. Some mementos are simply priceless.

If I close my eyes, I can picture him grabbing the visor, flipping the cap onto his head, and adjusting it. Then, he's heading off into the sunset, a hero among men.

It's how I'll always envision him.

What is one item that you associate with a grandparent? Share your memories by emailing LuAnn at [email protected] or via one of our social media channels.