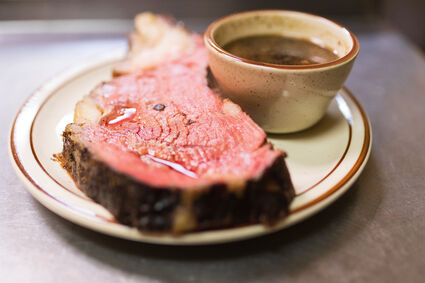 It’s 7:30 p.m. on a wintry Friday night and the parking lot outside Johnny’s Cafe, a South Omaha landmark, is jammed.

The scent of seared steak wafts out the heavy, faux-bronze doors as they swing outward, and diners walk into a glowing, ruby-hued time capsule of Nebraska food history.

To the left is the massive dining room, still crowded on weekends with silver-haired men in sportcoats and women in their best blouses being served by staff who have worked here for decades. To the right is the dark bar, where guests saddle up to sip stiff Old Fashioneds, surrounded by cowboy memorabilia.

“People come in and they just say ‘I am glad you are here’,” said Jack Kawa, 80, who has worked at the family business since childhood. “We have been here for so long, and I think people still enjoy going out and having a nice prime rib any night of the week.”

Exactly 100 years have passed since a Polish immigrant named Frank Kawa bought a bar called Johnny’s at the corner of 27th and L streets and decided to turn it into something more.

Johnny’s Cafe has survived the rise and fall of the stockyards, Prohibition, the glory days of Nebraskans dining out after a good day selling cattle, the building of an interstate right outside its front door, an ever-evolving neighborhood, the ever-changing tastes of the dining public and now a pandemic.

It has outlasted the cavernous Mr. C’s, famed for its Christmas-lit dining room; Ross’, which closed when its owner refused to sell to a non-family member; Angie’s, a downtown spot that opened during the Great Depression; and countless others.

It has outlived Frank Kawa, who came here solo as a 10-year-old boy. The steakhouse is now run by son Jack Kawa and Jack’s daughters Sally Kawa and Kari Harding.

It has stood the test of time like no other old-school Nebraska steakhouse.

“We will not shy away from 100 years being a huge accomplishment, especially after COVID,” Sally Kawa said. “A lot of groundwork was laid before we ever walked in. We don’t take it for granted.”

The Kawa family doesn’t know exactly when the bar called Johnny’s came into existence, but the earliest known photo shows gun-toting men lining the bar next to whiskey barrels and gas lanterns.

“It was a little rough,” Sally Kawa said.

Frank Kawa added sandwiches to the bar after he bought it in 1922. By the 1930s, it was a steakhouse, open 20 hours a day from 6 am. to 2 a.m., slinging daily breakfast, sandwiches at noon and Nebraska beef and classic cocktails for dinner. It became a neighborhood nerve center for South Omaha residents, immigrant packinghouse workers and rural Nebraska farmers.

They all could find a boozy drink there even during the dry days of Prohibition.

Frank Kawa was a bootlegger in the late 1920s and early ‘30s — his baking sugar could be used to make alcohol — and “the beer baron of Omaha,” as the newspapers called him, eventually served nine months in jail for his sins.

By 1955, Omaha had overtaken Chicago as the nation's largest livestock market and meat packing industry center. Business boomed at the neighborhood steakhouse.

Jack Kawa and his brother Tom were working at Johnny’s by then, moving through the ranks: potato peeler, dish line, bus boy, waiter.

“We did all that malarkey,” Jack Kawa said.

He remembers riding to Johnny’s with his dad and seeing cattle trucks lined up from 27th Street all the way to the Missouri River. Staff butchered the meat and aged it in the basement.

Frank Kawa died in the early 1960s, and Jack and Tom took over. They expanded restaurant seating and employed a staff that grew to 125 people. The interior of Johnny’s today dates from an early 1970s remodel.

Omaha lawyer Bob Gonderinger first came to the restaurant in 1979, when he moved to town for law school. His O’Neill parents fondly remembered dining there when younger. His five kids learned how to dine out at Johnny’s, first eating spaghetti or chicken fingers and now, as adults, following in their filet-loving dad’s footsteps.

“I taught them right,” he said, chuckling. “It’s a lot more expensive now.”

Johnny’s is a place that’s about prime rib and filet and a handful of menu items that have stood the test of time. The cottage cheese spread has appeared on the menu since the 1950s.

Oxtails are served at Tuesday lunch, a Thanksgiving meal is offered every single Thursday at lunch, and prime rib makes an appearance every day, not just on weekends, like many other steakhouses.

Gonderinger loves the vintage menus framed in the lobby, which feature eye-opening low prices. In the bar, a Scottish Highlander steer head hangs on the wall, with eyes that glow red and a wired mouth that opens. Two stools at the bar are made from actual saddles, and two more sit in the lobby – a popular spot to snap iPhone photos. It’s a funky, dimly-lit history museum that serves slabs of beef.

“It’s special,” he said. “It’s a lot of hard work…a willingness of the next generation to step up and carry on the family tradition.”

Like their dad, sisters Sally Kawa and Kari Harding grew up at the restaurant. Both left Omaha for careers in hospitality: Kari at Marriott; Sally at Disneyland.

“At some point, my dad asked us if we wanted to come back,” Sally Kawa says. “We didn’t really discuss it. We just did.”

Jack never really retired — When not in Arizona, he’s at Johnny’s every morning.

Now, during what everyone hopes is the back end of the pandemic, customers have returned in full force.

“We could get back to doing what we wanted to do,” Sally Kawa said. “Our cooks could cook, people could eat, and we could run the business that we want to run.”

The Kawa family plans an entire year of 100th-anniversary celebration. Special events will include a monthly featured steak and beverage and history dinners exploring South Omaha’s past.

Johnny’s is pressing on into its second century. Its owners are thrilled to still be searing steak.

“When things were difficult, we really had to think about how much we were willing to risk to keep the restaurant open and the legacy alive,” Sally Kawa said. “We are so proud to be the ones to carry on the tradition that was started by a Polish immigrant with no formal education, just a desire to open a bar.”