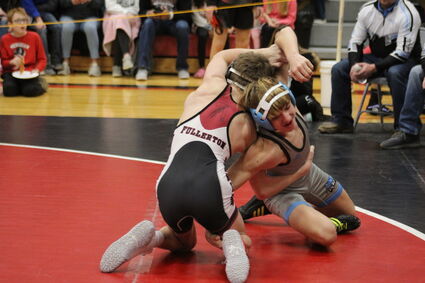 Stretch • Connor Thomson grabs the leg of Eathan Hoback, Fullerton during a consolation match, Friday, at district wrestling in Pleasanton. Thomson won, by fall, in 2:23 before being eliminated by Maddox Wagoner, of Kenesaw.

Summerland finished third in team standings at the Class D-2 wrestling district, held Friday and Saturday, Feb. 11 and 12, at Pleasanton.

Coach Dan Roeber said, "The Bobcats represented very well. We have been lead all season by our four seniors and to have them all qualify was awesome!