Orchard building demo may go through bid process once more 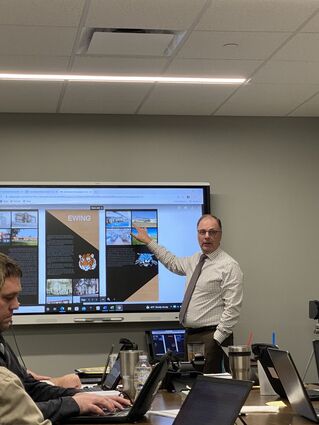 Designing history • Summerland School superintendent Kyle Finke shows examples of the historical boards, which will be installed at school, to board of education members, Tuesday, Jan. 18. Each panel will feature the history of Clearwater, Ewing and Orchard schools, along with photographs.

Summerland School board of education members discussed relocation of an HVAC system and demolition of the Orchard building during the board's Jan. 18 meeting.

Nate Schwager contacted Trane representative, Jeremy Reiter, to see if a previously-submitted bid was "still on the table."According to Schwager, the former bid is not good. Several reasons, including inflation rates and a dropped contract with Samsung, were cited by Reiter.

Instead, Reiter suggested Rutt's Heating and Air, from Hastings, look at the project. Schwager reported he, Reiter and a representative from Rutt's met at the Orc...