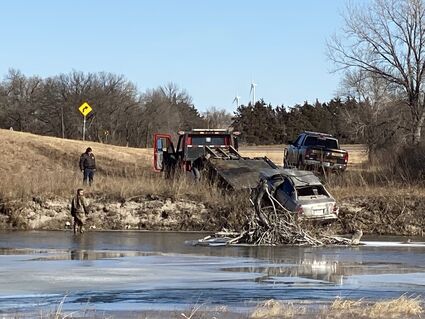 A car is pulled from the Elkhorn River, near the bridge on U.S. Highway 275, approximately two miles east of Clearwater, on Saturday.

Two individuals escaped injury from an early Saturday morning crash that ended with a vehicle in the Elkhorn River, approximately two miles east of Clearwater.

Antelope County Sheriff Bob Moore said a 911 call was received at approximately 3:30 a.m., after a truck driver, parked in a business's lot, in Clearwater, reported two individuals knocked on the door of his semi and requested he call 911.

According to Moore, Xavier Hobbs, 20, of Ewing, and a juvenile passenger, were westbound on U.S. Highway 275, when Hobbs lost control of the vehicle.