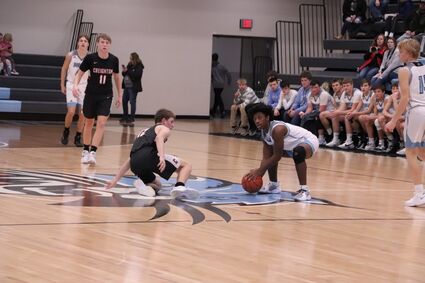 Drive • Jaykwon Petite grabs a loose ball, as a Creighton player attempts to get a takaway. The teams met Jan. 11, at Summerland. The Bobcats earned a 48-44 win over the Bulldogs.

Mason Hoke scored a baker's dozen and Michael Koenig pitched in 11 points, but it wasn't enough to overcome St. Mary's, Thursday, as the Redbirds flew to a 71-39 win on the Bobcats' home court.

The Cardinals continued to control the court, holding the Bobcats to 9 and 13 points in the remaining two quarters.

Summerland could not get the ball to fall, making only 10 of 25 shots from the two-point range.

From the charity stripe, the Bobcats made 58%, hitting se...