Summerland comes from behind to down North Central 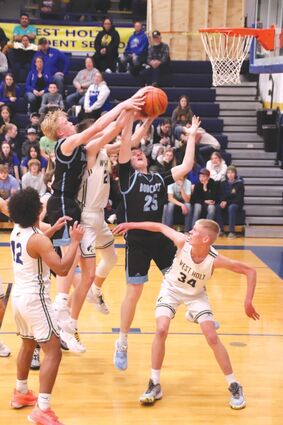 All hands on deck All Hands on Deck: Summerland's Alec Schindler andWest Holt player Lincoln Konrad reach for a rebound, while Dillon Moser attempts to secure the ball. West Holt held on for a 46-41 win, Friday, in Atkinson.

The Bobcats clawed through two opponents last week, finishing 2-1, after picking up wins over Plainview and North Central.

The Cats sit 5-6 on the season, following Friday's five-point loss to West Holt.

Coach Brett Kaczor said it was a busy, but successful week.

"Three games in one week after the holiday break, is very taxing, but we had a good number of guys step up into new roles," Kaczor said.

During a Jan. 4 home game against Plainview, the Bobcats relied on stong first- and fourth-quarter shooting to secure the 56-43 win.