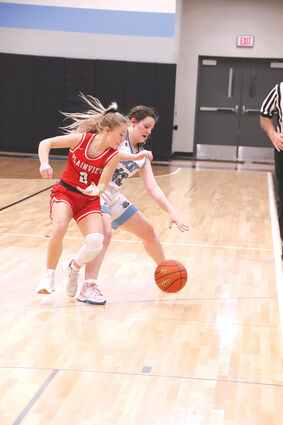 Kick ball • Harper Klabenes fends off a Plainview defender from trying to steal the ball. The teams played Jan. 4, at Summerland, with the Bobcats picking up a 52-46 win.

Summerland sits at 9-3 for the year, after the Bobcats competed in three games, beginning Jan. 4.

Coach Greg Appleby said his squad had three tough games and were able to survive with a 2-1 record.

"Extremely proud of this bunch of girls and their commitment to the team and to getting better every day in practice and games," he said.

The Bobcats returned from the holiday break to face Plainview, at home, Jan. 4 and earned a 52-46 victory.

"Against Plainview on Tuesday, a strong defensive effort set the tone and Mlnarik and Cheatum combined for 37 points. Emily Nordby chipped in with six...