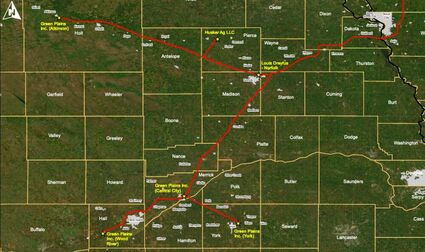 Holt County landowners expressed concerns about a proposed route, established by Summit Carbon Solutions, for a carbon dioxide pipeline that would cross Holt County. The pipeline would also pass through Antelope County, en route to Plainview and Norfolk. Carbon dioxide would be pushed through the pipeline to North Dakota, where it will be injected into the ground.

A handful of Holt County residents shared concerns about a proposed CO2 pipeline with supervisors during Holt County's Dec. 30 meeting.

Diana Steskal, of Atkinson, said landowners are asking supervisors to research pipelines and Summit Carbon Solutions before making any decisions.

"We'd like the supervisors to ask the Summit company for an open public meeting, to inform the citizens about the pipeline and let the citizens ask questions," Steskal said.