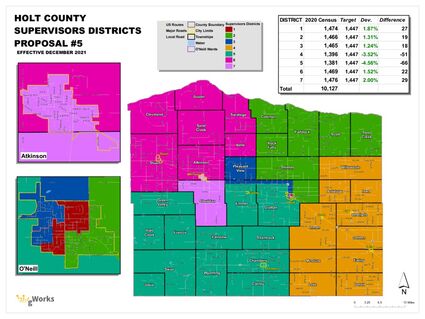 Holt County Supervisors approved Resolution 2021-33, redistricting of the seven supervisor districts, using an equal population, based on the 2020 U.S. Census, during its Dec. 30 meeting, on a 5-1 vote.

According to Census results, the population count totals 10,127, which would put 1,447 residents in each district.

The biggest concern expressed by Butterfield was losing a portion of Atkinson township.

The city of Atkinson remains in his district.

The population count for Butterfield's district sits at 1,476, which is 2% above the target.

District one includes 1,474, which is 1.87% above the target. It includes portions of O'Neill and will be represented by Josh Treptow.

Boundaries for district two, represented by Dustin Breiner, remain the same. Total population of the district is 1,466, or 1.31% above the target.

District three will include Pleasant View Township, the northern tips of Emmet and Grattan townships and the western portion of O'Neill. Total population is 1,465, which is 18 over the target population. Bill Tielke represents the district.

District four includes Willowdale, Antelope, Iowa, Inman, Verdigris, Golden, McClure, Ewing, Lake and Deloit townships. Its population count numbers 1,396, which is 3.52% below the target. Scott Keyes is the elected official for the district.

District five is served by Doug Frahm and includes portions of Emmett and Grattan townships, as well as Shamrock, Chambers, Conley, Wyoming, Fairview, Josie, Swan, Holt Creek, Francis and Green Valley townships. The district is 4.56% below the target, with 1,381 residents.

District six includes Stuart, Cleveland, Dustin, Sand Creek, Saratoga, Belle and Atkinson townships, with the exception of the city of Atkinson. The population totals 1,469, which is 1.52% above the target population. Darrin Paxton represents the district.