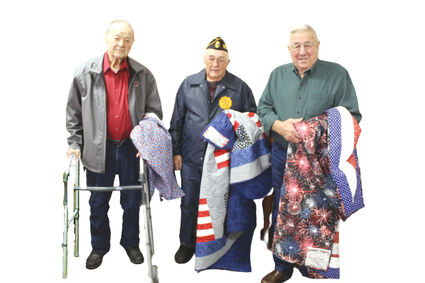 Thank you for your service • Dwayne Hobbs, Leonard Hawk and Robert Bartak each receive a Quilt of Valor, Sunday, during a presentation at Ewing Sanders American Legion Post 214.

Approximately 65 years after serving in the United States military, three Ewing veterans were awarded Quilts of Valor, for their service. Robert Bartak, Leonard Hawk and Dwayne Hobbs received the quilts Dec. 12, during a gathering at the Ewing Sanders American Legion Post 214.

"With a son deployed in Iraq, a gunner sitting atop a Humvee, she felt only 10 seconds away from panic," Jorgensen said.

During a dream, Roberts saw her son wrapped in a quilt. Roberts fo...