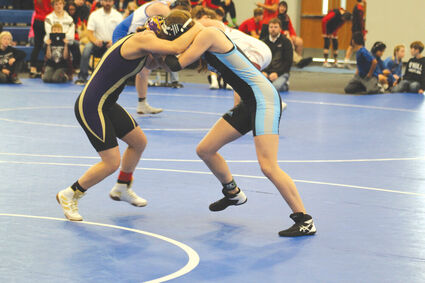 Game on • Lenora Kester (right) faces Sarai Mendez, of Grand Island, during a match, Saturday, at the O'Neill Invite. Kester finished third in the 114-division.

Ammy Arroyo, Lenora Kester and Calissa Kester stamped their names in the Bobcat athletic history books, Saturday, as the first girls' varsity wrestlers to earn medals in a meet.

Arroyo led the Bobcats, earning the silver medal in the 235-class at Saturday's O'Neill Invite.

In the opening round, Arroyo defeated Madelynn Jakubowski, of O'Neill, by fall, in 3:24. That set up a second-round match against teammate, Calissa Kester. Arroyo claimed the win by pin, in 1:14 The sophomore lost, by fall, in :45, to Pierce's Kenzie Parsons in the championship match.

Kester loss to Arroyo set up a consol...