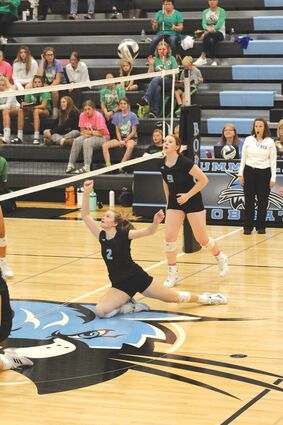 Big dig • Emily Nordby stretches across the court to dig a ball out of the net, sending it into play. Emma Kerkman prepares to run the team's offense in last Tuesday's match against Elkhorn Valley. In a thriller, the Falcons bounced back from being down two sets to win the match.

The first two sets went down to the wire, with the Bobcats winning 26-24 amd 25-23. The Lady Redbirds controlled Summerland in set three, 25-14, but the Bobcats rebounded and picked up a 25-20 win in set four.