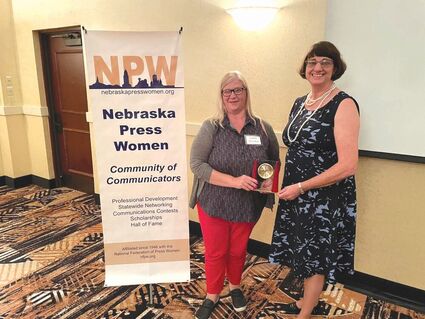 Award winner • LuAnn Schindler, publisher of the Advocate-Messenger, receives the Communicator of Achievement award from Barb Batie, treasurer of Nebraska Press Women. The award was presented Saturday, at the organization's fall convention in Grand Island.

The publisher of one of the state's newest weekly newspapers has been named the Nebraska Press Women Communicator of Achievement, according to Ruth Brown, NPW COA director.

LuAnn Schindler, who publishes the Summerland Advocate Messenger in northeast Nebraska, received the award at the NPW fall conference, Saturday, Oct. 9, in Grand Island. The award recognizes achievement in the communications profession, service to the community and industry and leadership in the organization.

A native of Clay Center, Schindler got hooked on journalism at her high school career day. She then earned an edu...