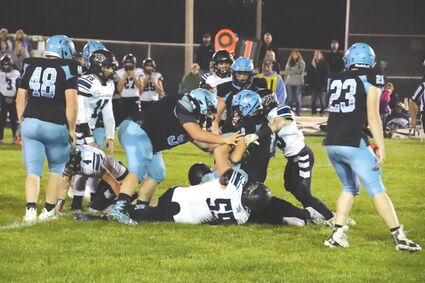 O-boy • Logan Mueller (l) and other offensive linemen open up a hole for Trevor Thomson. The Bobcats won Friday's game against North Central, 32-28, as Thomson raced past the 1,000-yard mark on the season.

Summerland Bobcat Head Football Coach Tom Thramer knows football is all about the mo', who has it and who capitalizes on it.

"The guys came out Friday and had a slow start - two turnovers - but never stopped believing," he said, about his team's 32-28 homecoming win over North Central.

Once junior running back Trevor Thomson busted a nice run for 70 yards, Thramer said both the offense and defense fed off that.

"Our guys were prepared and worked their tails off in the first half," he said. "The second half is where we have to figure out how to finish the game."