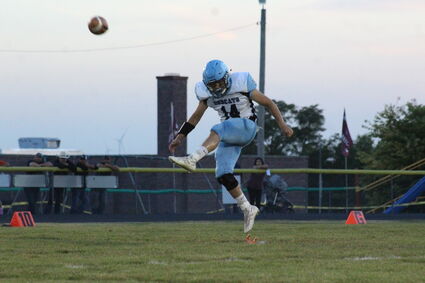 Gabriel Gamez kicks off following a Bobcat touchdown in the second quarter. The Bobcats lost to Neligh-Oakdale, 34-58, in a Thursday night game, played in Neligh.

A third-quarter drought plagued Summerland, as Neligh-Oakdale capitalized and downed the Bobcats, 58-34. The teams met Sept. 23 in Neligh.

Trevor Thomson led the rushers with 22 carries for 191 yards. Kendrick Schroeder carried the ball 14 times for 56 yards and Hoke picked up 50 yards on 14 carries.

Colton Thiele led the defense with 11 tackles, including four solo takedowns and one tackle for loss. Schroeder finished with 10 tackles.