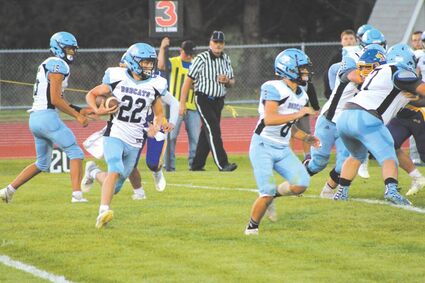 "We had some highs and lows, but I was happy with how the guys battled," he said.

West Holt's Caid McCart found the end zone first and capitalized on the PAT to give the Huskies an early advantage.

The Bobcats responded with a march down the field and quarterback Mason Hoke handed off the ball to Trevor Thomson who scooted 19 yards for the Bobcats first score. He ran in the PAT to tie the game at eight apiece.

Summerland's defense held West Holt and once the offensive unit was back on the field, Hoke tossed a 10-yard pass to Thomson to go up 14-8. The PAT failed.

The Huskies responded with two touchdowns, including five-and 61-yard runs by McCart, and succeeded with both two-point conversions.

Summerland had an opportunity to narrow the gap at halftime, but a 76-yard run by Thomson was negated by a holding penalty.

McCart added a 56-yard score in the third quarter. Lincoln Konrad connected with Isaac Pistulka to add the PAT, extending the Huskies lead to 32-14.

The Bobcats responded with a drive down field, culminating in a five-yard touchdown scored by Thomson. The PAT failed.

In the final quarter, Hoke trotted in from three yards out to pull the Bobcats within a single score, but McCart landed in the end zone on a two-yard run to secure the win for the host team.

The game ended with the Bobcats moving down field, but a pass from backup quarterback Sam Cheatum slipped through the hands of receiver Alec Schindler.

Thramer said it would have been easy to quit, when the Bobcats trailed by three scores.

"But they played their way back into the game at the end. West Holt is a very talented team and we were right there with them."

Coach Tom Thramer said, "We had some kids get banged up during the game and only time will tell how long they will be out or what their status is for this week."

Thomson averaged 6.3 yards per carry. He tallied 95 yards on 15 carries.

Mueller record a sack for a six-yard loss. Schindler grabbed two fumble recoveries and Hoke intercepted a pass for a 12-yard gain.

The Bobcats travel to Neligh-Oakdale, Thursday.

Thramer said, "Playing on a short week is tough any time but it is tougher when you are a little banged up. We will have to try our best to get prepared to put the kids in the best position to win the game. Neligh-Oakdale is very tough so it will be a good matchup on Thursday."