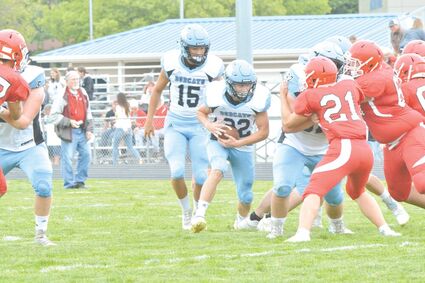 Score • Kendrick Schroeder avoids a pileup in the middle, en route to the endzone for the opening touchdown of the Bobcats game at St. Mary's on Friday. The Cards downed the Bobcats, 38-23.

Summerland struck early and took a four-point advantage to the locker room at the half, but it wasn't enough to subdue the rated St. Mary's on Friday.

Led by Aidan Hedstrom, the Cardinals rallied in the second quarter and secured a 38-23 win in O'Neill.

After sustaining an injury in the season opener, senior Mason Hoke started in the qb spot, completing three of nine passes for 43 yards.

Hoke added 29 rushing yards, while junior Kendrick Schroeder ran for 37. Levi Cronk topped the receivers with one catch for 2...