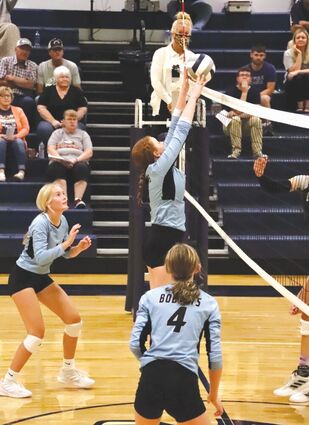 Solo attempt • Emma Kerkman stuffs the ball at the net, against Central Valley, Tuesday. The Bobcats finished 1-1 at the triangular.

Despite strong performances from the serving line and at the net, the Lady Bobcats finished last week with a single win and three losses in matches at the Central Valley and St. Mary's triangulars.

The Bobcats came out swinging against CWC in the second contest of the evening, wnning 25-16 and 25-20.

Mlnarik and Emily Nordby combined for 15 kills and each recorded one solo block.