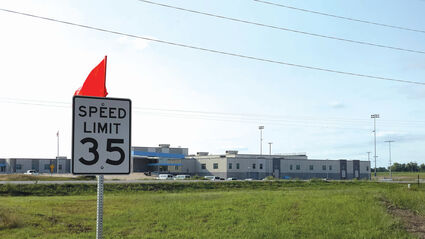 School zone • Reduced speed signs are placed on roadways near the intersection of Summerland Road and 513 Avenue, by Summerland Public School. Antelope County commissioners approved a speed limit resolution, Tuesday, during a meeting in Neligh.

Reduced speed limit signs, with flashing lights, will warn traffic traveling near the new Summerland School site, to slow down.

Antelope County commissioners approved a resolution to the effect during Tuesday's meeting, in Neligh.

Speed limit signs, slowing traffic to 35 miles per hour, have been placed at four spots, 200 feet in each direction, from the intersection of 857th (Summerland) Road and 513 Avenue. Commissioner Dean Smith asked if flashing lights have been

Boggs said, "They have been on order since July. Apparently they are shipped out." The road superintendent is hope...