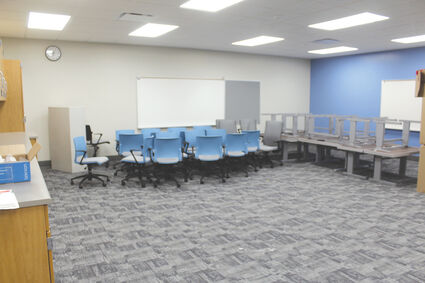 Staging area • Desks and chairs await arranging in an elementary classroom at the Summerland site. Teachers were expected to be able to work in their rooms the remainder of the week, in preparation of the Aug. 30 opening day of school.

Preparations for the 2021- 2022 school year are nearing completion for Superintendent Kyle Finke and members of the Summerland School staff.

In an interview, Friday, with area media representatives Finke said the new building "is coming along."

"The elementary, we could have probably been in there today, moving in," he said.

The lower level of the high school, which includes the industrial tech and ag areas and science and social studies classrooms, are slightly behind.

"The nice thing is, we weren't technically supposed to be in here until Dec. 20 and here we are, at the middle of August, and we've got a really good chance of having the kids all in one building, all in the classrooms."

While the music rooms and auxiliary gym will not be ready when the first bell rings, administrators have devised an alternative plan for classrooms.

Ag and IT will use the makerspace area in the basement. Elementary music classes will meet in an empty classroom, while upper level band and choir will meet in the gym.

The superintendent said the plan is to have the entire building inhabitable around Oct. 4.

"If things go well, it could be even a little earlier than that.

They've done a good job of keeping in touch with me and letting me know what's going on."

Furniture from the former sites was brought to the building earlier last week.

On Aug. 23 and 24, high school students assisted with the loading and unloading of materials for the new site. Plans were to wrap up the process by mid-day, Tuesday.

"It's coming along. There are some spots that are obviously are a little bit rougher than others, but I think, for the most part, all the classrooms we're going to need will be ready to go."

Teachers will be able to work in their classrooms for the remainder of the week.

"We've told them we don't expect it to be perfect. We just want to have an inviting environment to have kids come in and learn.

Finke said the classrooms are "phenomenal."

"There are two 10-foot white boards. Whenever the smart boards arrive, that will go between the white boards."

The smart boards are currently in a shipping container off the California coast and are expected to arrive mid-September.

A 12-foot white board, with built-in bulletin board space, fills the back wall of each classroom.

"The rooms are extremely large. I think they'll easily accommodate the 20 to 24 kids we've kind of expected," Finke said. The architectural firm has done an excellent job of laying out the building. It's a beautiful building."

The first home volleyball game, originally scheduled for Aug. 31, will now be played at Central Valley. Volleyball sleeves were not installed in the gym floor during installation and are expected to be installed Aug. 30. That bumps the Bobcats first home contest to Sept. 7, with junior varsity and varsity action scheduled.

Football games will be played in Orchard this season. Sod was placed on the competition field last month.

Finke said, later in the season, the junior high football team may be able to practice on the practice field.

"That's not set yet either." Finke said the his first day on the job - July 1 - was interesting. During a meeting that morning, members of the construction management team asked him about the latest date school could begin.

"I just got on the job a half hour ago," Finke said.

After a discussion with principal Greg Appleby, a decision to push the start date to Aug. 30 was made.

"We've been working with it every since. It's been a lot of fun." Finke said he did not realize the scope of involvement required from the superintendent on the construction project.

"That person has the final say as to whether or not that door jamb is okay or the cupboard door is crooked, fix that," he said.

The superintendent said enrollment in the new facility will be around 405 students.

"I think it's where they projected the number. I think they were right around the same number last year," he said.

"Hopefully, when we get up and going we can bring a few more students in."

According to Finke, a few students who reside on the fringe of the district have chosen to opt into a neighboring district.

"With the size of our district, these are some of the things our board thought would happen," he said.

Nine bus routes are in place to transport students to the facility, including regular rural bus routes and shuttle buses for students who live in town.

Central pick-up points have been identified in all communities.

Finke acknowledged that in some communities, bus drivers have picked up students at daycare sites.

"We didn't know where to draw the line," Finke said. "The bus route may change. We'll look at it in a couple weeks."

Once construction is finalized and the budget complete, Finke said he feels confident about his superintendent's role.

In addition to handling details on school construction, Finke has spent time working on the budget with business manager Sally Finch. Finke also has met with Nebraska Department of Education officials to crunch numbers.

"I've had a little time, not as much as I think I would've liked to, but I have had some time looking at the budget."

"That's about two cents lower than what was projected. I think we're hoping to get the General Fund levy around the 55 or 56 cent range. Hopefully, our overall levy is around the 75- or 76- cent range," Finke said, noting the figures were preliminary and won't be finalized until Wheeler County valuations are received.