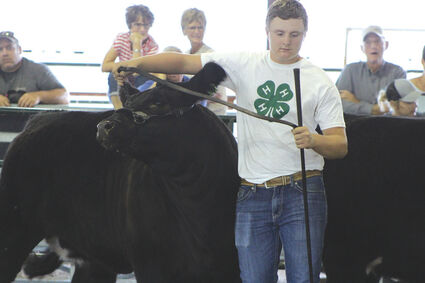 Show skills • Dillon Moser leads a market heifer around the livestock arena during the 2020 Antelope County Fair beef show and go. The 2021 fair begins Aug. 3, with 4-H and FFA dog, cat and small pet shows scheduled for the day.

A year after the pandemic caused the 2020 fair lineup to offer a limited schedule, the 2021 version of the Antelope County Fair returns with a full slate of shows, activities and events.

On July 30, the 4-H style revue and clothing construction judging will take place at 9 a.m. at the courthouse in Neligh.

Photography entries will also be judged. All non-interview clothing exhibits will be entered between 9 and noon.

Jackpot roping will begin at 1 p.m., Saturday, in the arena. Registration for the event begins at noon.

A second evening of pre-fair clean up will be held Monday, Aug. 2. Families of 4-H members are asked to bring cleaning supplies to assist with final preparation at the complex.

The first 4-H, FFA and open class shows will begin Tuesday, Aug. 3, at 9 a.m., with the dog show. At 9:30, felines will take center stage, followed by the small pet show. All animals will be released once judging is completed.

Open class entries will be accepted between 8 a.m. and 8 p.m.

Exhibitors are asked to use the north door of the exhibit building to bring entries.

That evening, at 7 p.m., team penning will be held in the horse arena.

Open class exhibits will be judged between 8 a.m. and noon.

FFA and 4-H livestock entry will be held between 4 and 7 p.m. At the same time, bucketcalf participants will go through the interview process.

A favorite family-friendly event - Ag Olympics - will take place at 7:30 p.m., in the livestock arena.

All livestock will be checked in with superintendents between 8 and 10 a.m.

Bucket calf interviews will continue between 8 and 11 a.m.

Farmers Pride will sponsor a pancake feed from 9 to 11 a.m.

The 4-H/FFA horse show will start at 11 a.m. in the horse arena. Timed events, ground roping and working stock events are on the schedule.

The dairy show will begin at 1 p.m. in the livestock arena. Milking dairy cows will be released at the conclusion of the show.

Stop by the exhibit building and livestock facilities, starting at 1 p.m., to view exhibits. They will remain open until 9 p.m.

The Clover Kids and 4-H bucket calf show will take place at 3 p.m.

A best-dressed goat competition is slated to begin at 4:30, or immediately following the bucket calf show.

Registration for the livestock-judging contest begins at 5 p.m., with the competition to start at 5:30.

The beer garden in Riverside Park will open at 6 p.m. and operate until midnight.

At 7:30 p.m., extreme bull riding will begin in front of the grandstand.

A second day of horse competition begins at 8:30 a.m., with judged events and trail.

The 4-H/FFA and open class rabbit and poultry shows will start at 8:30, running simultaneously in the livestock arena.

At 2 p.m., the 4-H/FFA and open class goat show will be held. The sheep show will start immediately following the goat show.

Youngsters may want to check out the inflatables that will be in operation from 6 p.m. to 11:30 p.m.

The beer garden, in Riverside Park, will open at 6 p.m. and remain open until 1 a.m.

At 8 p.m., country music artist Michael Ray will perform in front of the grandstand.

A full schedule of events is planned for Saturday, starting with the 4-H/FFA and open class swine show, at 8 a.m.

The exhibit building and livestock facilities will be open from 9 a.m. to 9 p.m.

The pavilion will be open from noon until 10 p.m.

A cornhole tournament is slated to begin at noon, in the park. At 1:30, a horseshoe-pitching contest will be held, east of the tennis courts.

An antique tractor parade will depart Riverside Park at 3:30 p.m. and travel around Neligh.

The annual premium auction will begin at 4 p.m. in the livestock arena.

Inflatables will be open for youngsters from 6 to 11:30 p.m.

The annual demo derby will begin at 7 p.m., at the grandstand.

The final day of events will begin with a pancake feed in Riverside Park. 4-H and FFA exhibitors will eat free. Serving begins at 7:30 and continues until 10:30 a.m.

The exhibit building and livestock facilities will open at 9 a.m. and close at 4 p.m.

An open horse fun day will begin at 10 a.m. in the horse arena.

A community church service is scheduled to start at 10 a.m., near the pavilion in the park.

At 12:30, the 4-H fashion revue and awards ceremony will be held in the livestock show arena.

Between 3 and 5 p.m., all exhibits will be released and must be picked up and removed from the exhibit building by 5 p.m.

Nebraska Truck and Tractor Pullers will compete in front of the grandstand at 5 p.m. The beer garden will also be open at that time.