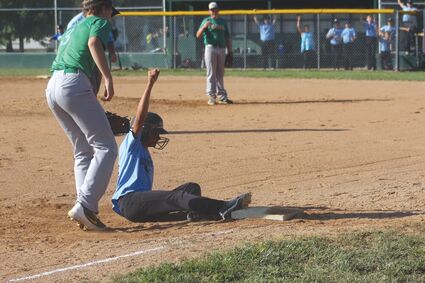 Slide • Parker Napier signals for a time out, after a successful theft of third base against O'Neill, Sunday.

Summerland knocked off Wynot, 9-1, in the first round, which set up a Friday-night-lights matchup with Laurel.

The Bobcats walked away with a 7-5 win.

At 8 p.m., they fought Creighton for a chance to work their way through the bottom bracket, but the Bulldogs proved to be a tough opponent and ended Summerland's season, with a 20-5 wi...