Three killed in crash in Neligh 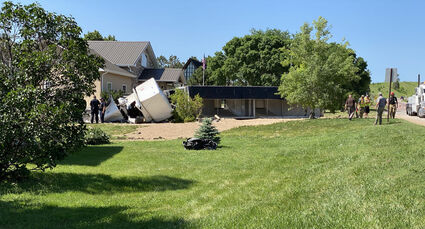 A truck tractor/semi-trailer collided with a Dodge Journey, at the Highway 14 and U.S. Highway 275 intersection, in Neligh, Friday afternoon. Three individuals were killed in the crash, which occurred at approximately 1 p.m.

A crash, in Neligh, Friday afternoon claimed the lives of three individuals.

Geraldine Elsberry, 74, and passenger Norman Elsberry, 72, of Orchard and Shane Ernest, 31, of Dalton, were killed in the accident, which occurred at approximately 1 p.m., at the intersection of Nebraska Highway 14 and U.S. Highway 275.

The Nebraska State Patrol released names of the individuals involved in the accident at approximately 8:45, Friday evening.

According to a press release from NSP, troopers said they believe a truck tractor/semi-trailer, driven by Ernest, was traveling southbound on Highway 14, when...