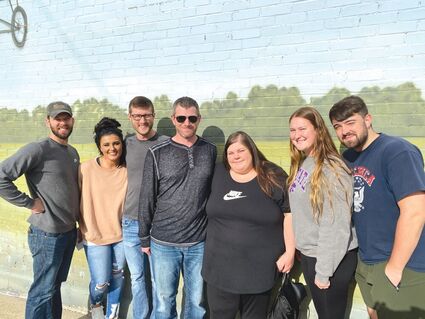 Kings and queens of the road • Winners of the FunFest road rally include (l-r): Trevor and Tiffany Stelling, Kray Funk, Mark and Shayla Bartak, Riley Funk and Victor Sikes. The Stelling team earned 54 points to edge out the second-place group.

A 45-mile cruise between Ewing, Orchard and Clearwater drew 15 teams to compete in the FunFest road rally, sponsored by the Summerland Advocate-Messenger and Ewing Young Members Club.

Knowledge of each of the town's businesses and landmarks came in handy.

A background in history may have been helpful, too, as several clues referred to the past.

Having a lead foot didn't make a difference. Contestants simply needed to answer questions and snap photographs to document each stop.

Stops along the route included Wilbur-Ellis, Corner Hardware and More, Orchard swimming pool and Rex Theater, in Or...