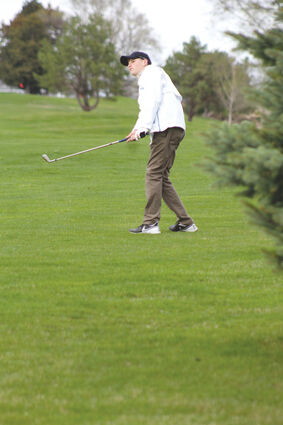 Chip shot • Kelton Bruhn knocks a short ball onto the green at a meet earlier this season. He shot 117 at the Niobrara/Verdigre Invite, Wednesday.

Bearinger was 15 shots off the lead, won by Tim Atkinson, of Boyd County. He finished with an 80.

A pair of Neligh-Oakdale golfers finished in the second and third spots. Garret Belitz edged teammate Jesse Green by a stroke, 87-88. Schuyler Mustin of Stuart finished fourth, shooting an 89. He tied with Gavin Longsdorf, NO, and Michael Vanness of Wausa.

The Bobcats ended sixth in the eight-field tournament, shooting 414.