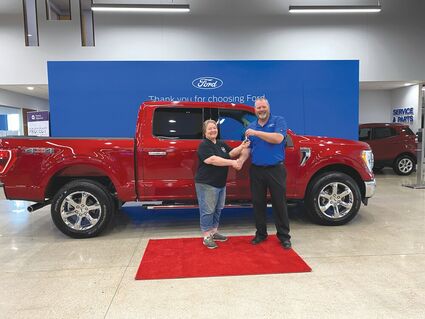 Red carpet treatment • (l-r): Teresa Legate, of Neligh, receives keys to a 2021 Ford F150 pickup from Jeff Ronspies, of Courtesy Ford, in Norfolk. Legate won the pickup in an online sweepstakes and took possession of the new vehicle, May 6.

At first, Teresa Legate was skeptical.

The Neligh woman said she received a telephone call, April 14, from a woman claiming to be a representative from Luke Combs and Ford Motor Company. Legate was told she was the grand prize winner of the Ford Proud to Honor Luke Combs Sweepstakes.

The prize: new Ford F150 pickup, along with two tickets to a Luke Combs concert of her choice.

"I hope it's not a scam," Legate told the Advocate-Messenger that day.

She remembered entering an online contest "a while ago" via a social media channel and tagging her daughters, Teri Held and Tonya Legate.

And then, she went about her business, running Sly's Family Bar Grill, with her husband, Brian, and the rest of the Legate family.

On April 19, Legate received notification the winning pickup was valued up to $60,000.

"The price will include sales tax, title, delivery fee, dealer fee (plus any other dealer costs)," the email read.

Legate would be responsible to register and insure the truck.

She was instructed to select a dealership to work with, so she contacted Jeff Ronspies, at Courtesy Ford, in Norfolk.

She also contacted a local lawyer to make sure the contest was on the up-and-up.

Ronspies said, "She did her due diligence."

He contacted Ford Motor Company representatives to make sure the contest was legitimate.

By April 23, both Courtesy Ford representatives and Legate knew the contest was "the real deal."

She could have custom ordered a pickup, but delivery times could have taken up to eight months. Instead, they checked out three 2021 trucks on Courtesy Ford's lot and selected one.

The Legates picked up their new pickup May 6.

"I can't believe it," Legate said, as Ronspies handed her keys to the new truck.

Sometimes, lightning strikes twice, as luck would have it.