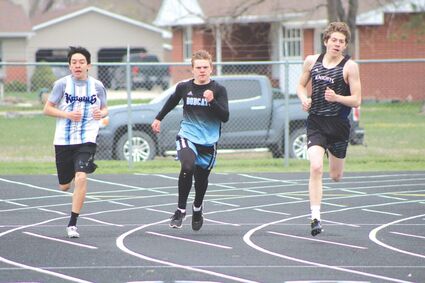 Around the bend • Cody Wickersham (center) and two unidentified runners, round the final stretch of track during a race at the Boyd Count Invite. The Summerland boys' track team claimed the team trophy in the April 27 meet.

The Summerland boys' track team outdistanced Niobrara/Verdigre by 25 points to earn the team trophy at the Boyd County Track Invite.

The Bobcats scored 123 to bring home the gold from the April 27 meet, held in O'Neill.

Results from the boys' division include: