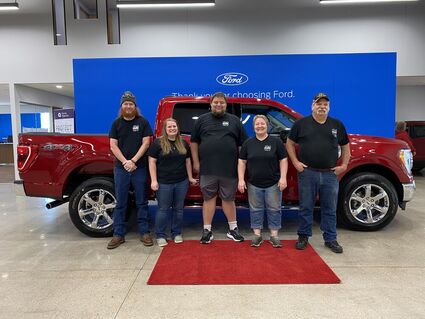 Teresa Legate, of Neligh, won a Ford F150 pickup. She, along with family members, picked up the vehicle from Courtesy Ford, in Neligh, Thursday morning.

At first, Teresa Legate was skeptical.

The Neligh woman said she received a telephone call, April 14, from a woman claiming to be a representative from Luke Combs and Ford Motor Company. Legate was told she was the grand prize winner of the Ford Proud to Honor Luke Combs Sweepstakes.

The prize: new Ford F150 pickup, along with two tickets to a Luke Combs concert of her choice.

"I hope it's not a scam," Legate told the Advocate-Messenger that day.

She remembered entering an online contest "a while ago" via a social media channel and tagging her daughters, Teri Held and Tonya Legate.