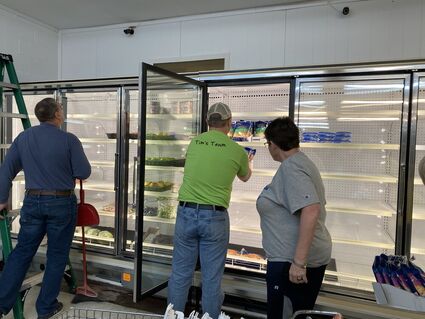 Stocking shelves • Brett Kaczor and Vicky Bollwitt stock a new cooler system, installed last week at Ewing Family Foods, with produce and dairy products. Kaczor said the updated system is one way the local business is reinvesting in its future.

Shoppers at Ewing Family Foods may notice the freezer section, located along the east wall of the store, features a new look.

The produce cooler along the north wall also has a fresh appearance.

In-stock items were pulled from coolers and the freezer section beginning March 10 and stored in the walk-in cooler.

"It was a process getting it through all the doorways, up the ramp and outside," he said.