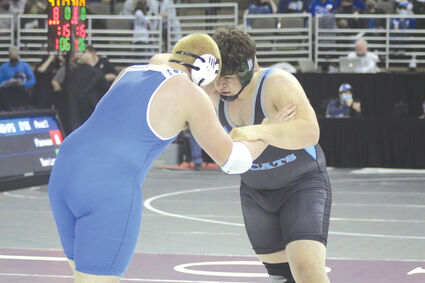 Championship season • Logan Mueller and George Fraher, of Guardian Angels Central Catholic, face off in the opening round of the Class D State Wrestling Championships, Feb. 17, at the CHI Center in Omaha. Mueller advanced to Thursday's championship round, where he lost a 7-4 decision to Brayton Branic, of Sandhills/Thedford.

Four Summerland wrestlers entered the 2021 Nebraska School Activities Association State Wrestling Championships with common goals: perform to the best of their ability and bring home a piece of hardware. Here's a look at the two-day tournament and each wrestler's path through the bracket.

In his first-ever appearance at the state tournament, Logan Mueller marched his way to the championship match.

On Wednesday, he faced George Fraher, of Guardian Angels Central Catholic. Fraher, who entered the competition with 38-17 record, lost, by fall, in 4:22.