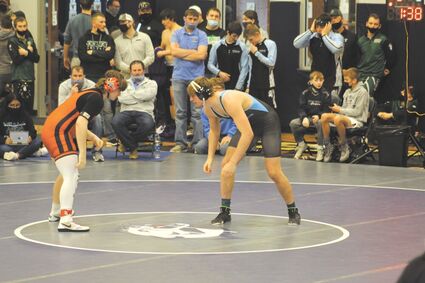 Face off • Wyatt Chipps (left) takes a neutral stance against an Julien Grindle, of Cambridge, during Saturday's district wrestling final, at Central Valley. Chipps lost in the heartbreak round, just missing a trip to the state meet, which starts Wednesday and continues Thursday, in Omaha.

Colton Thiele will make a return trip to Omaha after finishing second in the 195 class.

Thiele began with a bye and downed Bryson Warner, Southern Valley, by an 8-4 decision. That set up a run for first place, where he met Bobby Evans, of Cambridge.

Rafe Grebin will also compete in his second state meet after finishing third in th...