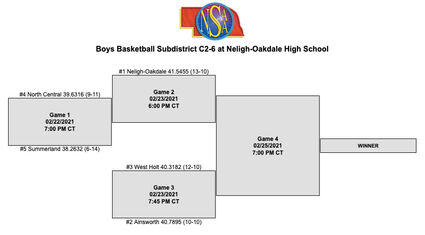 The Bobcats will face North Central at 7 p.m. The game will be played at the Elmer Lindahl Gymnasium at Neligh-Oakdale Public School.

The winner will face the top-seeded host team, Tuesday, at 6 p.m. The nightcap will feature the third-seeded West Holt Huskies against Ainsworth, who enters as the number two seed. They are scheduled to tip off at 7:45 p.m.

The winners of Tuesday's contests will meet in the subdistrict final, Thursday, at 7 p.m.