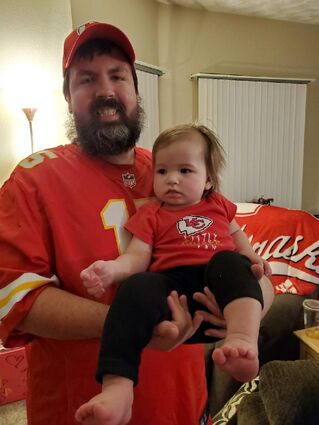 Mark Mahoney holds his daughter Hazel during the Super Bowl Sunday evening. Despite his smile, Mark wasn't happy with the final score of the big game, which the Kansas City Chiefs lost 31-9.

Super Bowl Sunday was a fun day for me, as it featured three of my favorite things: family, food and football.

The only disappointing part, though? The final score of the big game, which didn't go in favor of my favorite pro football team.

I didn't expect the Kansas City Chiefs to get beat down, 31-9, by the Tampa Bay Buccaneers, a team Kansas City defeated, 27-24, on Nov. 29 in a regular-season road game.

What I did expect was a close championship contest, with the Chiefs coming out on top in Tampa, Florida, for back-to-back Vince Lombardi trophies.