Lady Bobcats pick up win with big second half 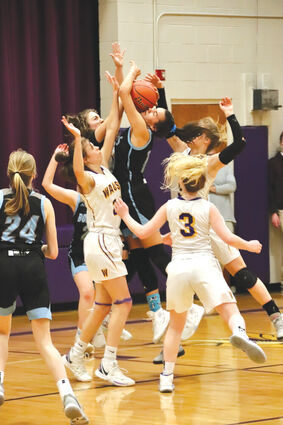 Firing frenzy • A basketball slams into Brenna Wagner's face as she attempts a shot in the lane during the Lady Bobcats' 52-33 win against Wausa, Thursday. The Summerland senior scored 31 points in the win.

The Bobcats traveled to Wausa last Thursday to take on the Vikings in a doubleheader of nonconference varsity action. First on deck, the Lady Bobcats battled a scrappy Wausa squad.

Both teams got off to a rocky start, with numerous fouls in the first period. The Lady Vikings held a narrow 8-7 lead after one quarter.

The Lady Bobcats responded in the second stanza and managed to reclaim the lead at half, by a score of 21-18.

Coach Greg Appleby said, "After a sluggish start in the first half, we turned it on and played well offensively and defensively in the second half."