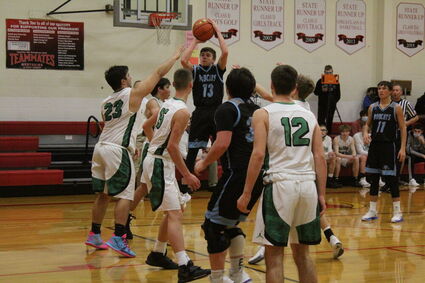 Delivery • Keegan Smith extends the ball toward the rim while navigating through heavy traffic during Saturday's first-round Niobrara Valley Conference game against Elkhorn Valley. The Falcons swooped past the Bobcats, 44-25.

The teams met in the first round, Saturday, at O'Neill St. Mary's.

The Bobcats were slow to score in the first quarter and played catch up, finding themselves trailing by five, 11 - 6.

Both teams held steady in the second quarter and Summerland went to the locker room down, 23 - 17.

Turnovers and limited shot attempts plagued the Bobcats in the third, as EV went on a 13-2 run, to go up 36-19.

The Bobcats scored six points in the final q...