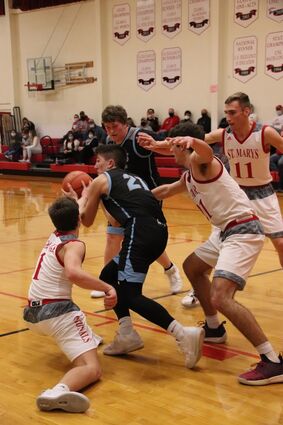 Inside game • Dalton Rotherham battles for position against a St. Mary's defender during Thursday's 68-27 loss, in O'Neill.

The Summerland Bobcats ran up against a tough opponent, Jan. 14, in O'Neill, where the St. Mary's Cardinals defeated the Bobcats, 68-27.

Summerland scoring was tough and Mason Hoke lead the team with nine points.

The Bobcats had a rough start, going down, 18-4, early, due to the stifling defense of the Cardinals.

The Bobcats were able to get back on track in the second quarter, offensively, but St. Mary's opened up their offense, stretching the lead to 42-18.

A tough third quarter saw the Bobcats down, 58-25, and a slow fourth quarter against a solid St. Mary's team sent Summerland home...