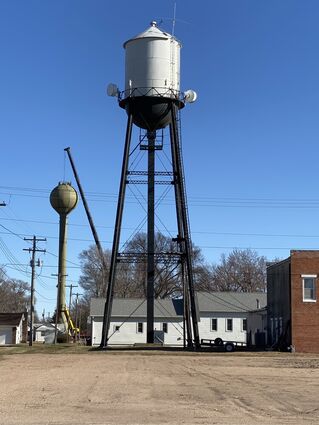 Future use • Whether Ewing's old water tower should be dismantled or maintained was discussed during the village's Jan. 11 meeting. No decision was made.

Pros and cons of maintaining Ewing's iconic water tower, after the new tower moves online, were discussed during the village trustee's Jan. 11 meeting.

Trustee Dustin Wright said, "I feel there's people that don't want it down."

"It's hard and people want to keep it. The real cost though becomes the maintenance when it starts rusting and running down," he said. "That's one of the reasons we wanted to go to a new tower."

Miller asked if the tower would be gifted to a group or what its purpose would be.

She suggested working with History Nebraska to have the structure evaluated for potential restoration as a historic structure.

The water tower, originally installed in 1908, was purchased from the Spittler Brothers for $3,200.

Village maintenance supervisor Alan Potter said in 2002, when it was painted outside, painting costs ran $22,000.

He asked if lead paint had been removed.

The last inspection did not list lead paint on the structure. The tower had been sandblasted "a long time ago," Potter said.

According to Miller, paint should last 15 to 20 years.

"You'd have that recurring expense."

Potter said insurance on the structure runs $2,200 per year.

Trustee Kane Fry asked how much it will cost to remove the tower once the new water tower goes online.

Wright said the cost is included in the construction bid of the new tower. Miller did not know the exact amount.

The current structure is comprised of riveted sheets. Miller said occasionally, cattle feeders have utilized the bowl of an old tower for a water tank.

"Your demo could be about anything," he said. "It's a question of economics if you want to keep the tower or not. Is it worth the memorabilia versus the economics?"

Miller offered to compile costs for maintaining the structure and present figures to the board in the future.

In other business, trustees:

• Approved a bid from Ryan's Truck and Tractor for an alternator for the police car.

• Discussed fixing the brick structures at the entryway of the Ewing Cemetery. The Nolan and Kathy Rockey family paid to have the gates powder-coated, but the brick supports will need repaired before the gates are reattached.

• Talked about well improvements. Bids will be accepted for new pumps.

• Discussed costs of a sewer main extension to a new construction site in the village. Miller suggested the Department of Envionmental Quality offer, in writing, that serrvice will not need to be engineered. Wright made a motion to table discussion until more information is available.