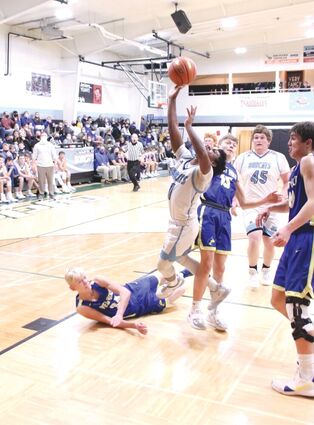 Balancing act • Jaykwon Petite navigates through heavy traffic in the lane during a Jan. 8 game in Orchard. He avoided injury after getting tangling with a Huskie player. Petite scored seven points in the Bobcats' 48-47 loss.

The Bobcats boys took the West Holt Huskies down to the wire, but lost, 48-47, in a close game played Jan. 8, in Orchard.

On offense, Mason Hoke and Dalton Rotherham both scored 10 points to lead the team.

The Bobcats struggled early against West Holt, going down, 22-9, in a tough first quarter.

During the second quarter, the Bobcats adjusted and began chipping away at the big lead and were able to cut it to 30-22 going into the half.

To start the third quarter, the Bobcats came out more determined, and after a few play adjustments, cut the lead to 39-34.

In a back-and-forth final eight...